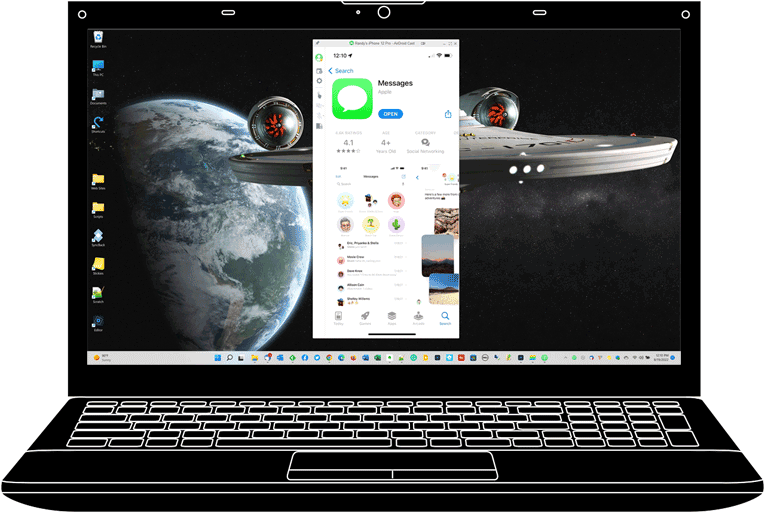 Peanut butter and jelly. Abbott and Costello. Lennon and McCartney. iPhone and macOS. Android and Windows. Some pairings just work well together.

How about iPhones and Windows computers? That’s more like peanut butter and hummus. I like each of them by themselves, but, mixed together, they leave much to be desired.

Unfortunately, my (stubborn) technology preferences have led me to adopt this incongruous combination. The iPhone has always been my smartphone of choice. And while I’ve used both Macs and Windows PCs over the years, I prefer the latter.

To enable better integration between my phone and computer, I really should switch either from Windows to macOS or from iPhone to Android. To date, I haven’t been willing to make either of those changes, so I’ve had to live with some compromises. For example, if I had a Mac, I could take advantage of Apple’s “Continuity” features, including…

For me, these conveniences seem more nice-to-have than critical. I don’t care much about the first two features, and I achieve the third via cloud services like OneDrive and Dropbox.

However, I am insanely jealous of one Continuity feature that integrates iPhones and Macs: the ability to type and send iMessages and SMS messages directly from a Mac on a “real keyboard” (with full conversation history available on all your Apple devices: phone, tablet, computer, etc.).

I hate typing on a phone. As a member of Gen X, I grew up with personal computers, but not with hand-held devices. I can type well enough on a larger on-screen keyboard, like on an iPad, but I’m miserable (and error-prone) when I have to type long messages on a phone. In fact, sometimes when I need to send a long iMessage or text, I’ll compose it on my computer and email it to myself. Then, I copy and paste it between the Apple Mail app and the Messages app on my iPhone.

The ubiquity of the Messages app on all Apple devices, including iPhones and Macs, is almost enough to convince me to switch computer platforms. (Note: the combination of Windows and Android can achieve comparable integrations, but I’m less likely to switch my phone to Android than my computer to macOS.)

But what if I could figure out a SIMPLE way to integrate the Messages app on my iPhone with my Windows computer?

Over the years, I’ve researched, considered, and/or tried several potential solutions. None are ideal, and each one has pluses and minuses.

A dead simple solution would be to buy a Mac. For example, the entry-level Mac mini costs $700. I could put the mini in any room in my house, connect it to my home network, and then remotely control it from my Dell Windows 11 laptop (via Chrome Remote Desktop or similar).

This would be the most elegant solution, but far from the cheapest. The other downside would be the overhead of maintaining another computer (software updates, etc.).

In short, this solution would be overkill unless I had other reasons for needing macOS.

Instead of buying a physical Mac computer, another option would be to run a virtual one on my laptop. Via either VirtualBox or VMware Player, you can run a virtual Mac from within Windows (see: How to Install macOS on Windows 10 in a Virtual Machine).

The legality of running macOS on virtual machines is muddy based on my research. The other problem with this approach is the convoluted setup process. I’d prefer not to “junk up” my Windows installation with VM software and the hacks needed to get it to run macOS. As a general rule, I prefer simplicity. In the past, I’ve found virtualization on Windows computers to be fragile.

Several Windows applications allow you to mirror your iPhone display on your computer monitor. Some also allow you to control the iPhone remotely with your mouse and keyboard.

When I first received my Dell XPS laptop, the Dell Mobile Connect program was pre-installed, and I tried it out. I used the program successfully a few times before the train went off the tracks. The pairing process between my iPhone and my computer became flaky and eventually stopped working altogether.

I wouldn’t recommend anyone adopt this solution since Dell has announced end of life for the application.

While researching other iOS mirroring solutions, I came across AirDroid which despite its name works with both Android phones and iPhones.

The price is reasonable, and the app has a three-day trial which I leveraged to take it for a test drive.

On my computer, AirDroid Cast was easy to use and mostly worked as advertised.

You can mirror your iPhone in several ways.

All these mirroring options worked on my computer, except the first one (as I noted above).

Tip: The company also offers a more basic app (AirDroid vs. AirDroid Cast). You need the Cast version to control your phone remotely from your computer.

With AirDroid Cast, I was able to type and send iMessages and SMS messages via my computer keyboard. But I did find some gotchas:

At $3.49 a month or $29.99 per year, the app is a great value, especially if it’s something you’ll use routinely. For me, the jury is out about whether I’d use it regularly enough to subscribe.

Another solution would be to run a virtual iPhone or iPad on my Windows computer. As with a virtual Mac, I’d be able to use my laptop keyboard to type into the Messages app on the virtual device.

Most makers of iOS emulators intend their products for the enterprise market (e.g. for software companies that want to test their software). As you might expect, their prices are not consumer-friendly.

I found two options worth considering.

iPadian is an iPad simulator that gets mentioned in several blog posts. At $25, the price is right, but the marketing website for the app is spare and provides little detail about the features or functionality. I don’t feel confident giving them my money.

Appetize.io is a web app that can emulate various iOS devices and has flexible pricing. I tried the demo and was able to sign on to my Apple account from within the virtual device. The problem is that the emulator does not appear to support messaging — which is the whole point for me.

Pair a Physical Keyboard with My iPhone or iPad

You can pair iOS devices with Bluetooth keyboards. This would be an easy solution — and one I may eventually try. But retrieving the keyboard from a drawer and pairing it would involve more friction than I’d prefer.

Use DIGITS from T-Mobile

T-Mobile (my phone carrier) allows you to send SMS messages from your phone number directly from your computer via a web app and Windows Store app called DIGITS.

I’ve tried out DIGITS and it’s far from an ideal solution due to several limitations:

Note: Verizon and AT&T seem to have similar solutions.

If you have a Google Voice phone number, then the Google Voice web app is a great way to send SMS messages from your computer.

Years ago, I used Google Voice as my primary phone number. After a while, I decided it would be simpler to just give out my direct iPhone number to people. However, I still have the Google Voice number and use it occasionally for special purposes.

For example, last May I needed some customer support from Amtrak. Rather than wait forever on their phone line, I decided to try to get help via text. I could have opened up the Messages app on my phone. Instead, I opened the Google Voice web app on my laptop so I could type my messages on a “real” keyboard.

Use an Alternate Messaging App

Outside of Apple Messages, most messaging apps provide seamless fluidity between iPhones and Windows computers. WhatsApp, Signal, Telegram, Slack, and Discord, to name a few, have clients available for iOS, Android, Mac, Windows, and web. I’ve used several of these apps over the years for various purposes.

The problem is that my immediate and extended family members have iPhones and communicate over the Messages app. They aren’t going to adopt an alternate messaging platform for my convenience.

Apple could solve this entire conundrum if they were to release a web client for Apple Messages. A web app would be trivial to access and would provide a complete solution:

Unfortunately, the odds are low that Apple will enable web compatibility anytime soon. Too much of their business strategy relies on the exclusive interoperability and synergy between its various hardware product lines (Mac computers, iPhones, iPads).

The only glimmer of hope is that in 2021 Apple enhanced its FaceTime video conferencing system to allow anyone to join a group chat via a web browser. Previously, joining a FaceTime call required an Apple device.

Was the FaceTime web client the first step in Apple opening up more gates into its walled garden? I doubt it, but I can always hope.

Have I missed a workable solution to integrating Messages with Windows? If so, I’d love to hear your idea in the comments. (Note: I moderate all comments so you may experience a delay before your comment appears on the post. For any SPAMMERS out there, don’t waste your time submitting as I will reject your comment.)