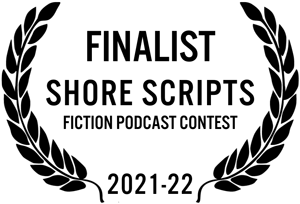 My script, The Vairon, was one of the 15 Finalists in the Shore Scripts 2021-22 Fiction Podcast Contest.

While at U.C. Berkeley, I met Monica Sullivan, the producer of a weekly radio drama show (“Shoestring Radio Theatre”) which aired on KALX-FM (and later KUSF-FM). I submitted a script and after hearing it produced, I was hooked. Over the years I became more and more involved in the all-volunteer, non-profit radio drama troupe, which began nationally syndicating its shows in 1993. I went on to write, direct and/or produce over 20 plays (30 to 90 minutes each) and 25 shorts — across all genres. If you are interested in the details, you can view my complete Radio Drama Portfolio.

In early 2000, I started working for an Internet startup and no longer had time to be regularly involved in Shoestring productions. However, I did manage to find the time to produce some audio comedy with my own side troupe, Crunchy Frog Comedy.

After producing my last play with Crunchy Frog Comedy in 2003, I took a break from radio drama production for about 16 years. I finally returned to the hobby as the co-founder of Seriously Strange Audio Theater, which launched to the public in May 2019 with a website, YouTube Channel, and two initial episodes. We released two additional episodes in May 2020.

Listen To My Productions

You can listen to many of my “Shoestring Radio Theatre” productions and all of my “Crunchy Frog Comedy” and “Seriously Strange Audio Theater” productions, as described below.

My full-length plays air periodically in rotation on Shoestring’s weekly and national broadcasts. The Shoestring website has instructions on how to listen.

Several of my favorite shorts and comedy sketches are available for immediate listening via the playlist below (or you can view my Radio Drama Portfolio which includes detailed descriptions of each short as well as the option to play them). The shorts below are listed in chronological order:

I also write film scripts, and, currently, screenwriting is my primary focus as a writer.