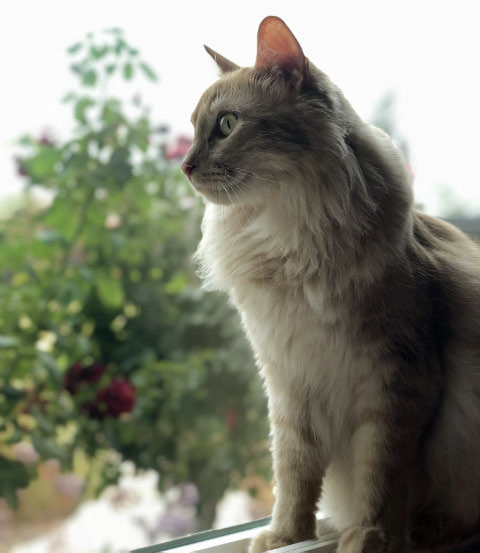 By way of introduction, I am two-and-a-half years old, and I own four bipedal primates who work as my servants in my nice two-story suburban house. Out of charity, I share their services with a housemate named Toby.

I don’t know why he would be interested, but one of my servants (the tall one who often chases after me with a brush) frequently listens to strange voices talking about the “FIRE Movement.” Since I am widely recognized as the smartest member of the household, I’m surprised that no one has ever asked ME about MY opinion on FIRE.

Well, let me tell you — as soon as I finish scratching my ear.

OK, done. What a relief. Now I can focus again.

What do I think of FIRE? Let me tell — my side is twitching! Guess it’s time for some grooming.

Done. Clean again. What was I talking about?

Oh, here comes Toby. Scram other kitty — you can sniff me later.

What was I doing? Oh, yeah, let me tell you about my thoughts on FIRE.

And let me tell you why … after I eat some more of my breakfast.

Back, with a full tummy for now.

For anyone who doesn’t know, FIRE stands for Feline Indifference Rest Everyday.

I came from humble beginnings. My first memory, at about the age of four weeks, was being lost on the streets of San Francisco with my sister. We were hungry, homeless and not sure what to do. One day, a giant primate scooped us up, put us in a box (which was great because I LOVE boxes) and took us to someplace called SPCA. There, I was poked and prodded, stuck with needles, and experienced other worse things which would be indecent to mention.

The good news is that we had our own private condo and a large staff of servants to cater to our every need. They called us Wee-Bey and Striker for some reason, even though our real names are kitty and other kitty.

One day, four bipeds I’d never seen before (a giant one along with a medium one and two small ones) visited our condo and started babbling about how cute Striker was. I think they were hoping she would adopt them. But she mostly ignored them. Being the vastly smarter sibling, I noticed right away that these servants looked healthy, strong, and probably very capable of opening cans, pouring kibble and cleaning sandboxes.

I decided right on the spot that I would adopt these primates.

My first commandment to my new staff was for them to immediately find me a bigger house, and before I knew it, I was saying goodbye to Striker and our modest condo. After a short time in another box (yay!), they took me into my new house. However, much to my irritation, they locked me into just one of the rooms in my new home. I quickly realized these furless primitives would need more training than I had originally anticipated.

Also, to my surprise, my nose told me right away that another master lived in the house. The servants called him Toby, but I knew his real name was other kitty. For some reason, they started calling me Milo. I decided they were too incompetent to learn better.

In any case, after a few rounds of observing and sniffing Toby under the door, I concluded that he was too dumb to pose a threat; plus, he smelled just fine to me. I decided he could stay in the house along with my new servants. I ordered them to open the door, and finally, I had the full run of the house.

Now that I had achieved the good life, I could enjoy typical juvenile pursuits like playing, chasing, scratching, climbing and eating. Toby was also good for a few laughs in case I got bored.

After several months of laboring at these activities, I realized there might be more to life. I started to have doubts that I could keep up the pace until my old age. I also worried I might have to adopt more servants if I kept up my lifestyle.

Around the time of my first birthday, while at my doctor’s office, I heard another patient talking about FIRE, and the idea instantly clicked with me.

The main pillar of the movement is to achieve feline indifference as soon as possible and enjoy its benefits much earlier in life.

Why should I wait until I am at the ripe old age of 12 or 13 to get lazy? Why was I wasting away my lives laboring so hard at trivial pursuits?

What if you wait too long to enjoy a life of apathy and lethargy?

I decided then and there to drop everything and pursue a FIRE lifestyle. Ever since, I can hardly be bothered with playing with my toys or servants. I also try to get in at least 10 naps per day. Just sitting and doing nothing will get to you after a while. I’m telling you, I just did it for three years on my private backpack. And I’ve never been happier.

I’m not young anymore, everybody. But I am sure smart. And look at me today.

I personally think FIRE is the biggest achievement, feline speaking, you will ever, ever make in your lifetime.

As a footnote, in the hope of avoiding controversy, I want to clear up some confusion about the FIRE movement. Please know that just because you achieve Feline Indifference, it does not necessarily mean you have to Rest Everyday. Most of us who achieve FI decide to rest every day and every NIGHT.

Note from the (primitive bipedal primate) editor:
Thanks to Paula Pant at Afford Anything for the inspiration for this post. To learn more about the real “FIRE” movement and recent controversy around it, visit the links below:

Update (10/14/2018)
For my favorite (human) rebuttal to Suze Orman’s comments, see Erik Carter’s post on Forbes (which is clear, concise and easy to understand).