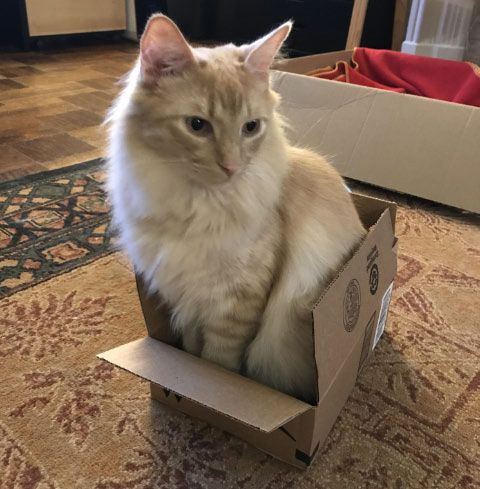 I was recently listening to one of my favorite pawcasts (“The Scratching Benjamins”) where the host led a roundtable discussion about extreme frugality.

As you probably know, frugality is one of the key principles of the FIRE movement (Feline Indifference Rest Everyday).

To achieve heightened states of indifference, and peak levels of rest, you can’t be worrying about buying stuff or your bank account balance.

As I mentioned in my previous post, I live with a bunch of primitive bipedal primates. What can I say? Household help is hard to find these days! Even though I’ve been trying to train them for a couple of years now, they just don’t seem to understand how to lead a frugal lifestyle. So, I have been trying to show them by example, hoping their feeble minds might one day grasp the concept.

To help other masters who may be facing similar challenges with their servants, I thought I’d publish my 7 pillars of frugal living:

1) Economize On Your Bedding

I can and do sleep anywhere and everywhere in my house. Although I prefer a nice backpack to curl up on, any flat surface will do, really. I’m not fussy.

By contrast, my servants sleep on huge space-hogging beds. I do admit that Toby (my housemate) and I like to sleep UNDER these beds on occasion, but I wish my primates could be less finicky about their bedding.

As you can see below, Toby and I can get comfortable just about anywhere.

2) Limit Servants to a Vegetarian Diet

The primates in my house used to be very finicky eaters before I trained them. They used to insist on eating expensive processed food and a lot of meat products. Over time, I was able to wean them off of such foods and introduce them to a mostly plant-based diet. This has many benefits.

Water is expensive. You should reserve it only for its intended purpose: drinking. No matter what I do, my primates pee and poo in our porcelain reservoirs, ruining a completely good water source. They have no common sense or manners whatsoever!

By contrast, I take care of my business only in sand, which is far less expensive than water (unless you have it imported from Hawaii). So far, I have not been able to train my servants to follow my lead, even though they can see that I have a magic sandbox which cleans itself twice a day. There is plenty of room in our backyard to install a sandbox big enough for primates, but they refuse to listen.

Also, they waste a ton of my water on bathing. I don’t know why they need to use water when saliva (a renewable resource) is so effective at cleaning and cleansing. Sometimes I even lick their foreheads or forearms clean in an attempt to show them the way. Alas, no luck so far. As a consolation prize, I must say that I do enjoy the salty taste.

Rather than living alone, I generously share my house with my frenemy, Toby. This allows me to maximize the time I can dedicate to resting everyday, since he can share the chore of mentally stimulating and exercising the primates in the house. For example, when I am busy with a nap or just can’t be bothered.

One of the most baffling aspects of furless primates is their addictions to screen time. They love electronic screens, big and small. I’ve tried taking away their screens, but they get irritable and twitchy when I do that.

For anyone pursuing Feline Indifference Rest Everyday, you can opt instead for an easier to use and far less expensive screen. I’m talking built-in models! Built-ins often come with a house and are far more energy-efficient. Also, they are usually more entertaining.

My servants are always trying to impress me with the gift of fancy toys. What a waste of money! Oh well, at least they give me more stuff to feel indifferent about.

I have been trying to encourage them to buy me simple things like string or twine. And, let me tell you: it’s far more cost-effective to buy one long cord and cut it into small pieces than to buy a 12-pack of precut strings.

My wait staff always seem to be receiving boxes full of useless junk. Why can’t they just learn to buy EMPTY boxes? The box is what’s important — not the stuff inside!

If you choose to work with an advisor on your plan to achieve FIRE, make sure to avoid flea-based planners. Yech, who wants to get fleas?! That’s too high a price to pay to achieve Feline Indifference.

Well, there you have it: my 7 pillars of frugal living. 10 would have been a nice number, but — before I could come up with 3 more pillars — I lost interest in writing this post and decided to take a nap. As befitting of someone who has achieved Feline Indifference Rest Everyday…

Note from the (human) editor:
The inspiration for this post came from two sources: