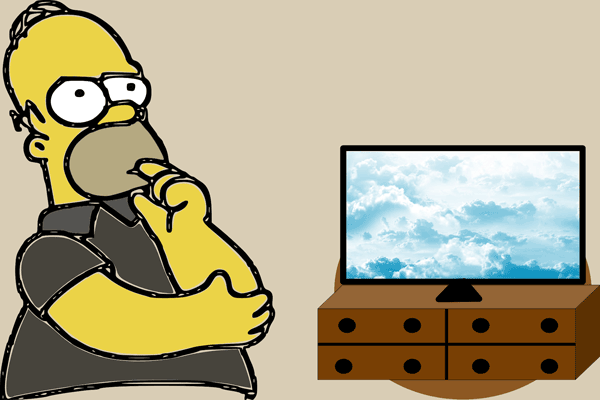 Man Seeking Woman, a fantastical satire of dating in the modern age, is one of my favorite TV comedies from the past ten years. And yet, I nearly missed out on it.

Because I too hastily passed judgment and gave up on the show after its first season of ten episodes on FXX.

The comedy starring Jay Baruchel, Eric Andre, and Britt Lower vacillated between reaching inspired levels of lunacy and falling flat with forced humor. I really appreciated the spirit of the jokes, but they were not landing regularly enough to sustain my interest. I waffled back and forth but ended up “quitting” the show and skipping the second and third seasons when they premiered.

Over the years, I felt a nagging doubt that maybe I had given up on Man Seeking Woman too quickly, especially since I continued to read good things about the show. Finally, about three years later, I subscribed to Hulu (to watch The Handmaid’s Tale) and decided to give Man Seeking Woman another chance. (Update: as of November 2022, the show does not seem to be available for streaming anymore on Hulu or anywhere else.)

I started from season two, and lo and behold, the show delighted me. The love stories in the second and third seasons were compelling and helped balance the wacky humor with some real heart. Showrunner Simon Rich also honed the series’ razor-sharp satire.

My experience with Man Seeking Woman is not unique to that show. I’ve felt similar uncertainty about several other TV series and have frequently made the “wrong” decision about whether or not to continue watching them.

In the “olden days” the TV landscape included far fewer shows from just three to four broadcast networks and a handful of noteworthy cable channels. Outstanding series stood out from the crowd and demanded your attention.

Today, in the era of Peak TV, with original content spewing out continuously from across the spectrum of broadcast networks, cable channels, and streaming platforms, great shows have become a dime a dozen. The idea of watching all of the good shows you are interested in is no longer remotely possible — not even for professional TV critics, who get paid to watch TV.

Now, unlike in earlier television eras, if you watch one show, you are often doing so at the cost of watching another show which may be infinitely better. In other words, the “opportunity cost” of watching the “wrong” show is higher.

This predicament likely will grow worse once media giants such as Disney, Apple, and Warner Brothers finally launch their forthcoming streaming services. The number of “originals” (original, exclusive shows) trying to attract viewers will increase dramatically.

The seemingly infinite number of TV shows available these days raises an important question for any avid TV viewer:

I used to have a rule of thumb about watching the entire first season before deciding anything (at least for shows with about 10 episodes per season). Many series require several episodes or even an entire season to hit their stride — or for you to invest in the characters and storyline. Countless times, I have been unsure about a show after five episodes and totally into it after ten.

More recently, I have lost my patience for giving a series an entire season to develop or to pique my interest. I have too many other great things on my list to watch. But, overall, I am still struggling with finding the right balance between giving a show too little time or too much. I don’t have any easy answer.

To illustrate my point, let’s take a look at some shows from my viewing history — examples where my judgment and decision-making were arguably faulty (at least at first).

I almost skipped one of the greatest TV series of all time. The first time I tried watching Breaking Bad, I lasted three or four episodes before deciding the pace was too deliberate (i.e. slow) to hold my interest. Flash forward a few years and three seasons were available to stream on Netflix, and the show had exploded in popularity, critical acclaim, and (well-deserved) hype.

I decided maybe I had been “wrong” in my initial assessment and tried the show again. This time, I committed to watching at least the entire first season, and by the end of it, I was hooked. I quickly binge-watched the first three seasons and then eagerly watched the remainder of the series in “real-time” on AMC.

Update: History repeated with the prequel series Better Call Saul. I aborted after one season. Later, during the pandemic, while running low on things to watch, I resumed the series and got hooked.

This will sound like heresy to many TV fans, but I did not like The Sopranos at first. I am not predisposed to crime and mafia stories. After trying a handful of episodes (back in the day via Netflix DVD rentals by mail), I decided the show was not up my alley.

I now realize that I had not watched enough episodes to get into the groove of the characters and themes.

In part because my wife was interested, I tried watching the show again maybe a year or so later. This second time around, the show stuck. We methodically watched most of the series via Netflix discs and caught the last season or so directly on HBO.

While still not one of my personal all-time favorites (I’m generally more into sci-fi and fantasy), the show was thrilling to watch and gripping television.

Much like Man Seeking Woman, The Good Place is one of the most creative and clever comedies from recent years. And I made the “wrong” decision the first time I tried watching it.

I tend to shy away from network shows. For the past ten years, I have primarily watched cable and streaming series. As a result, my tastes have grown accustomed to edgier and more sophisticated content. And I have developed a prejudice against the broadcast networks.

After watching a few episodes of The Good Place, I judged the show to be too broad and mainstream for my tastes. In retrospect, I clearly did not give the show enough episodes.

As I found out later, when I gave the show a second chance via Netflix, the series offers remarkably inspired comic performances from its stupendous cast and delicious, unexpected twists and turns in its storyline.

Now I would name the show as one of my favorite comedies of the past decade.

While traveling recently, I binge-watched the entire two-season, 12-episode run of this British dramedy (via Amazon Prime). After a few episodes, I was finding the main character mostly irritating and unappealing.

Even so, I stuck with the show for a few reasons:

The result: by the end of the first season, I had warmed to the characters, humor, and pathos of the show. The supporting characters get even deeper in season two, and the show portrays one of the more nuanced relationships between sisters that I have ever seen.

I have absolutely no regrets that I plowed forward and finished the whole series.

Arrested Development is a zany comedy that started its life on Fox and finished it on Netflix. The show features an overwhelming number of insanely funny comic actors, including Jason Bateman, Portia de Rossi, Will Arnett, Michael Cera, Alia Shawkat, Tony Hale, David Cross, Jeffrey Tambor, and Jessica Walter. And that list does not include the countless juicy guest stars.

The gifted cast and comedic style should have put the show right up my alley. I always wanted to love it, but I never did. And I stuck with it for too long.

I always appreciated the show more in spirit than in execution. For me, the humor fell flat (or felt painfully contrived) about 75% of the time. I continued to watch for the 25% of the time that the show achieved pure comedy gold, with the futile hope that the series would eventually improve its consistency.

In retrospect, that was a mistake, and I should have bailed on the show after at most one season. I regret having stuck with it to the bitter end.

I watched five seasons of this Showtime melodrama. Each season, I asked myself why I was watching and whether I really liked the show. In the second half of each season, I would get invested just enough in the storyline to finish the season.

Part of my interest in the show was the Los Angeles setting and entertainment industry storylines. I am a sucker for showbiz dramas and comedies. However, over time, the showbiz aspect became less of a focus.

Ray Donovan is hard to love in large part due to a truly repulsive and monotonous lead character (played by Liev Schreiber in a performance without much range). A select few of the peripheral characters (e.g. Dash Mihok as Bunchy) are more compelling. But, for the most part, the characters are unappealing and don’t learn much from their mistakes, making them hard to root for.

With this series, I should have trusted my instincts and watched at most only one or two seasons of the show before giving up on it. I regret the time I invested in it.

Below are a few shows I’ve rejected with uncomfortable uncertainty.

To paint a balanced picture, for most shows, I am able to easily judge whether or not I like them and make a quick decision about whether to commit to watching them.

But for shows on the bubble which hint at the tantalizing potential of what could be … the choice can be difficult.

Do you have any hard and fast rules about how long to give a TV show to get good or to grab you? Or any anecdotes where you decided too hastily or not quickly enough? Please share in the comments. (Note: I moderate all comments so you may experience a delay before your comment appears on the post. For any SPAMMERS out there, don’t waste your time submitting as I will reject your comment.)