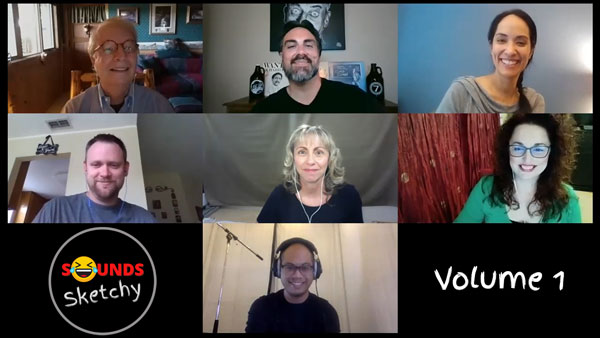 While sheltering in place during the COVID-19 pandemic, I recruited some of the voice actors in our group to perform a collection of IMPROVISED comedy sketches.

After several planning meetings and a couple of practice runs to work out the mechanics of recording in Zoom, we were ready for the “real thing.” We recorded several sketches on May 30th, enough to create two shows so far.

Today, I published Volume 1 of “Sounds Sketchy” — which contains our first collection of sketches.

The result has exceeded my hopes and expectations for the project, thanks to the gifted and comedically-inspired performers who helped bring it to life. (From left to right in the episode cover: Allen Fahden, Ryan Lee Boyd, Deborah Bromley, Chris Laird, Michelle LeMay, BillyJean Vollman, and Evan Widjaja.)

“Sounds Sketch” has released 16 episodes over two seasons, and we are gearing up for a third season. You can watch our trailer to get a taste of the show.