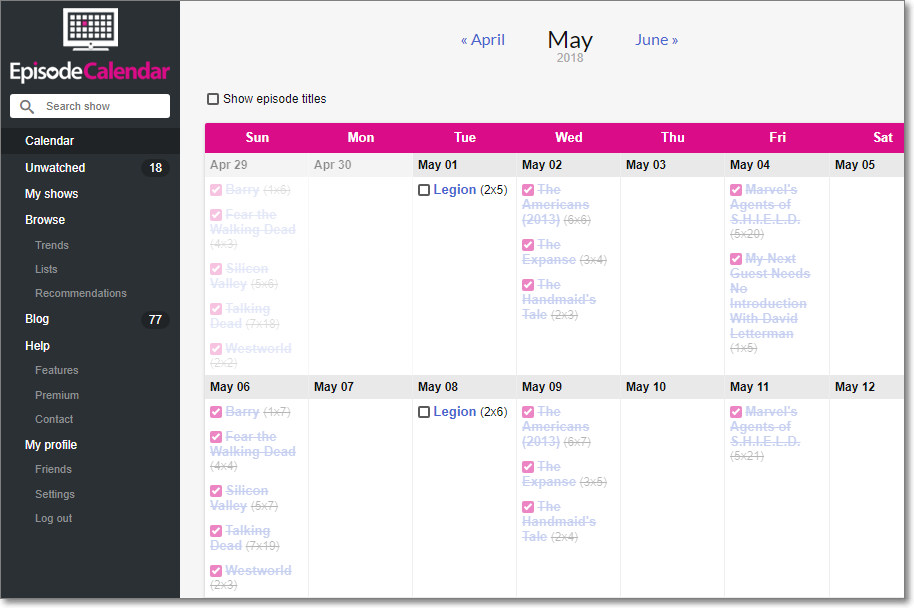 I’ve always been an avid but discerning viewer of both movies and television. I have gone through periods where I’ve focused more on one than the other, but for most of my life, I probably would have named movies as my favorite art form.

In the past ten years, however, television has arguably become more compelling than movies, as we have moved into an era of “Peak TV” where the number of “must-see” shows (especially scripted dramas) has far exceeded any viewer’s capacity to keep up with them. Even TV critics have realized that they can’t cover every show and are rethinking and redefining their roles. Earlier this month, Tim Goodman wrote about the idea of TV curation in The Hollywood Reporter (Critic’s Notebook: Amid Peak TV Glut, Critics Now Must Also Be Curators), and NPR’s David Bianculli also touched on the idea briefly with Terry Gross on Fresh Air (The Best TV & Movies Of 2018).

In November, The Simpsons spoofed the era of Peak TV with an episode where Homer became a TV recapper and complained to a TV executive:

Why are you making so many shows? No one could watch more than 300 of them!

Without a doubt, being a TV viewer has grown far more complicated in the last 20+ years, due to two key developments in the television industry.

First, more and more cable channels (both basic and premium) started making high quality scripted TV shows. HBO began the trend in the late 1990s and early 2000s with an outburst of buzz-worthy shows (Oz, Sex and the City, The Sopranos, Curb Your Enthusiasm, Six Feet Under, The Wire, etc.). Other premium channels followed suit (Showtime, Starz, EPIX, etc.). Eventually, basic cable channels (such as AMC, FX, IFC, The History Channel, etc.) got into the game and further exploded the number of original series.

Second, Internet streaming services (e.g. Netflix, Amazon and Hulu) started spending billions of dollars on original content. According to some news reports I’ve read, Netflix alone had about 700 original TV series in 2018. With other media giants such as Apple, Disney, and WarnerMedia about to start their own streaming services, the number of TV shows will only continue to grow for the next several years.

In the current TV landscape, a viewer must keep track of not only an overwhelming number of shows but also an equally daunting number of content service providers.

Is that show I like available on broadcast TV (ABC, CBS, FOX, NBC), on basic cable, on premium cable, on Netflix, on Amazon, or on some other service?

How will I know when a new season of my favorite show is available? Or when the second half of the current season resumes?

Does HBO Now (or Hulu or CBS All Access) have enough upcoming new or returning series to warrant paying for a subscription for the next two months?

How can I remember which episodes I saw of that show I started a year ago but then got too busy to watch.

About five years ago, questions like these started to make me anxious. At the time, several shows I watched were airing or streaming concurrently, and I was struggling to organize my TV life.

The thought struck me that this problem must be pretty common — and “there must be an app for that.”

I searched around on Google and found a few websites and mobile apps which purported to be TV organizers. I won’t try to recount the numerous tools I tried, but they all came up short on meeting my needs (or weren’t sufficiently user-friendly) — except for one: EpisodeCalendar.

Since adopting EpisodeCalendar, I have become the “master of my domain” when it comes to controlling my TV life!

EpisodeCalendar (which I briefly wrote about in a previous post, My Favorite Underrated Websites) has numerous features for tracking and organizing TV watching.

To get started with EpisodeCalendar, you need to tell the service which shows you watch. To add a show to your list, you simply enter its name in the search bar in the left navigation area. You can select the correct match from the auto-complete flyout or proceed to perform an advanced search.

After you select one of the search results, you will reach the show details page, where you can add the show to your list.

After you have started following a show, you can indicate which episodes you have seen. You can mark the episodes individually by using the checkboxes at the far right, or you can mark entire seasons/series as already watched (using the links above the episode list).

By adding all of the shows you’d like to track, you unlock the real power of EpisodeCalendar.

Not surprisingly given its name, the heart of EpisodeCalendar is the calendar view. This screen shows a traditional monthly calendar with all of the upcoming episodes of the shows you have followed.

Below is the calendar view of my TV schedule for May 2018. The show titles with checkmarks and strikethroughs are episodes I’ve marked as watched. I have not seen Legion Season 2, so those entries have empty checkboxes. As you may notice, May 2018 was a busy month for TV watching, but in reality, the calendar view is a bit misleading since I binge-watched Westworld, Arrested Development, and The Handmaid’s Tale weeks or months later.

EpisodeCalendar usually has reliable episode data for the current month and upcoming one to two months, so sometimes I use the calendar view to look ahead to see how busy my TV life is going to be in the next several weeks. This helps me decide whether it’s a good time to start binge-watching a streaming show or to catch up on some movies.

Maybe my favorite feature in EpisodeCalendar is the Unwatched Episodes page. The unwatched list displays your shows which have episodes you have not yet marked as watched. In other words, the page serves as your watch queue. Usually, right after I watch an episode of a show, I’ll come to this page and check it off my list.

The My Shows page is the organizational hub for EpisodeCalendar, where you can manage your shows in various ways.

The page has four default lists:

Each show can belong to only one list at a time.

The Current Shows list displays all of your TV series which are still in active production (i.e. future seasons are planned). However, if you have marked a show as Watch Later or Archived, then it won’t appear in this list, even if it’s still in production.

Like all of the lists on the My Shows page, the Current Shows list includes some meta info about each show (e.g. the last and next episodes and number of unwatched episodes). As shown in the screenshot below, if you click on Options for a show, you can adjust its settings:

The Watch Later list displays all of the shows you’ve marked … um, Watch Later. I use this feature for my “someday” queue — i.e. to keep a running list of shows that I might watch someday if I have time. For example, Legion was on this list for more than a year and a half, until I finally had time to try it out.

One important aspect of Watch Later shows is that unwatched episodes will not appear on your Unwatched list — nor will they appear on your Calendar View.

The Ended Shows list includes all of your series which have completed their runs, meaning nobody expects any further episodes. Similar to Current Shows, titles won’t appear here if you have moved them to Watch Later or Archived.

I use the Archive function in EpisodeCalendar to track the shows I’ve rejected or abandoned. In some cases, I tried a few episodes and concluded that the show is not for me. In other cases, I may have watched entire seasons before giving up on a series.

As shown in the screenshots above, EpisodeCalendar preserves your viewing history when you archive a show. This feature has proven valuable to me in the rare case where I have reversed my decision. For example, after watching the first season of FXX’s Man Seeking Woman, I gave up on the TV series; I liked the show but was finding it too inconsistent to keep watching. Even so, I always wondered if I had given up on the series prematurely. Three years later, when I decided to try the show again, EpisodeCalendar was there to remind me that I had watched all of Season 1 and could jump straight to Season 2. By the way, I ended up LOVING Seasons 2 and 3 and now consider the show one of my favorite comedies from the past ten years.

How Long Should You Watch a TV Show Before Judging It?

One other feature in EpisodeCalendar that I really appreciate is the optional email notifications. The web app can send you a list of your upcoming episodes on either a daily or weekly basis, and it can also notify you of season premieres.

EpisodeCalendar has some other features I don’t use, most notably custom lists and a few social and community features. If those are important to you, then you may get even more value out of the tool. For me, the TV management functions are the important thing.

EpisodeCalendar is pretty ideal for my needs, but the tool is not perfect.

One obvious feature which is missing is custom notes for My Shows. For example, when I added Dark to my Watch Later list, I would have liked to include a note such as “Highly recommended by my brother. German show similar to Stranger Things.” (I subsequently moved the show to my Archived list after watching two tedious episodes.) By contrast, the custom list feature on IMDb (where I track my movie watch lists) includes a comment field where you can enter free form notes.

EpisodeCalendar does not have a native mobile app, which I would find useful, especially when traveling. The web app is well-optimized for mobile use and works reasonably well on Safari on my iPhone, but the experience is just not quite as elegant as the desktop web version.

As great as EpisodeCalendar is, the tool does not solve the entire challenge of TV organization, as it’s missing one killer feature. Whereas the site meets its core goal of telling you WHEN you can watch a show, it does not provide any info about WHERE you can watch it. For example, if you want to check out the aforementioned Man Seeking Woman (which ended its run in March 2017), EpisodeCalendar has no info about how you can watch it today (currently, Hulu has the exclusive streaming rights). To fill in this gap in functionality, I supplement EpisodeCalendar with other tools such as JustWatch and GoWatchIt (both of which I also highly recommend).

I can’t imagine navigating the oceans of Peak TV without a tool like EpisodeCalendar. I highly recommend the website for anyone struggling to keep up with their favorite shows.

If you have favorite tools for organizing your TV life, please let me know in the comments. (Note: I moderate all comments so you may experience a delay before your comment appears on the post. For any SPAMMERS out there, don’t waste your time submitting as I will reject your comment.)